A Closer Look At Nurse Sharks

We have recently been working with shark organisations around the South Florida area to see what they do to help spread a positive message about shark conservation. Whether it's shark diving, educational projects, photography, we have seen what they do first hand. This post is focused on one of the projects we really thought was a great initiative to help educate the public about sharks and further diminish the misunderstanding and horrible reputation that sharks have.

22nd February 2014, we visited the marine park Theater Of The Sea. Since early 2013 they have been offering a close up encounter with the beautiful Nurse Sharks that are local to the Florida area. The chance to see sharks up close, touch them (respectfully) and swim with them, we thought was a great idea, albeit it is in captivity, but this is not an aquarium. Theater Of The Sea's shark programme is definitely a good idea/tool to help educate the public about sharks!

Our liaison for the day way Lacey Russell, she has been working with these sharks for 2 years. We started off with a talk about the handling of the sharks, their management within the park and how the programme has been going since it started. We were pleased to hear that the sharks are very popular and people have shown keen interest and want to be in the water with them and see them up close.

So once orienteering was over, it was time to get in the water!
The water is brought in straight from the Atlantic ocean, with a pump system that circulates the water. There are also natural surroundings such as mangroves and other plant life so the sharks are in an environment, built based on their natural habitat. They have been trained to learn certain things, feeding, recall, but apart from this, their behaviour was similar to the way they are in the wild. The were very shy and hesitant at first, but as the day went on, they became more and more confident.

We gently walked into the water, careful not to distress the sharks and sat down on a submerged bench, where the feeding takes place. We were introduced to the 5 sharks they have here and one by one, got to meet them individually. We held them correctly, had them swimming around us and fed them some of their favourite diet. Squid.

Coco, the largest male has definitely made it known he is the dominant shark there. He was the most confident and energetic and put himself first in line to be fed. Each shark is specifically fed with their individual requirements and favourite foods. Maintaining the natural amount they would consume daily to keep them in the best health possible.

It was very clear the sharks are well looked after and it was a pleasure to see the sharks behaving so closely to how they would in the wild. If they didn't want to be held, fed or handled they can swim away and move around as they want, with no intervention.

We would never condone touching a shark in the wild, but in this well formed and controlled environment, with the passionate shark team they have, we definitely left feeling that they are doing something worthwhile for sharks at Theater Of The Sea. Children and adults can really learn about nurse sharks and through them, realise sharks are not mindless killing machines. They are incredibly complex, instinctive animals that given the opportunity can show you the truth, each species is so different from each other and they are all incredible, placid and misunderstood animals that deserve a positive reputation and continued protection. 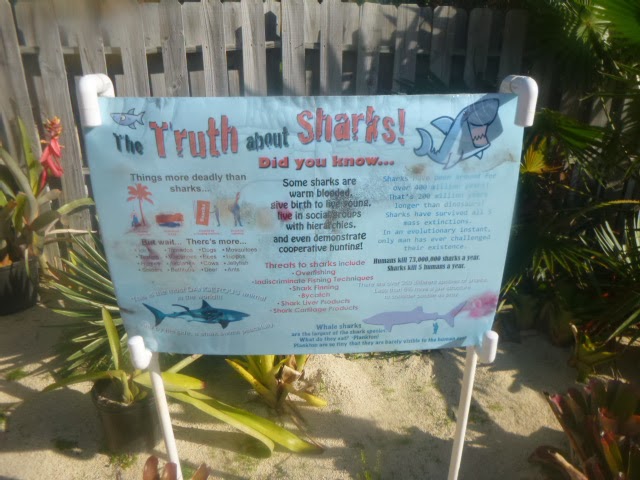